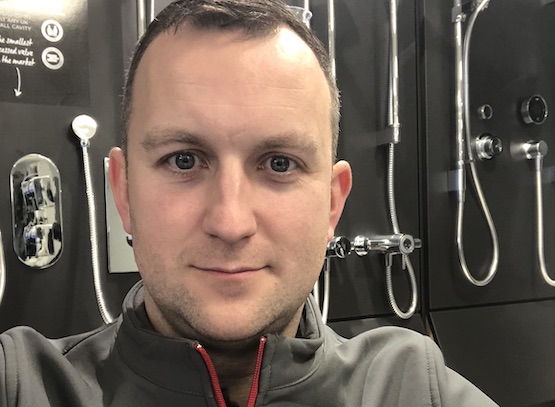 John McLeod, Senior Showroom Manager at Wolseley in Inverness, is the first graduate to successfully complete an apprenticeship through Wolseley’s award-winning Talent Guild.

John, who has held both office-based and showroom positions in his 11 years at Wolseley, began working towards the professional qualification back in April 2021. Just nine-and-a-half months later, in January 2022, he became the first colleague to complete one of Wolseley’s workplace development programmes, achieving a SVQ Level 4 in Management.

Thanks to the course, John now has a better understanding of how to ensure his branches can improve year-on-year, having been tasked with creating development plans for the seven branches he oversees.

Determination and support
“I initially applied for the role I’m in now some time ago but got knocked back, so I knew I had a skills gap that I needed to bridge. The apprenticeship through the Wolseley Talent Guild allowed me to do just that. I discussed the opportunity with my line manager in a performance review and they were really supportive, and it was something I was determined to do.

“I had 18 months to do the course but managed to complete it in just over half that time, which was nice! It was intense but manageable, and most of the classes were done over Microsoft Teams due to being in lockdown.”

“In total, I had 15 modules to get through, including two specialist subjects, which was great as it meant the training was relevant. I learnt about planning and business management which really helped me in my day-to-day role,” said John.

However, what makes John’s achievements more impressive is that his number of direct reports grew whilst he was working towards his qualification.

Training while working
John added: “I took on two new colleagues while I was doing my course – one has been here six months and the other for four – but thankfully I was able to carry on with my learning whilst developing our new recruits.”

Stuart Lee, talent director at Wolseley said: “The Wolseley Talent Guild provides our employees the best opportunity to learn new skills, increase their knowledge and develop behaviours. We have invested heavily in the Talent Guild as well as in equipping training sites around the UK to provide dedicated training and learning facilities.”